That’s right. It’s safer, faster and you’ll get trips back up more often.  Many campers choose tubing as their favorite activity at winter camp. Why shouldn’t they? 1/4 mile long, speed, 3 turns, a ride back to the top. It’s great fun! We upgraded the famous tube run in three ways this year. Safety, speed and the ride to the top. Safety and speed were addressed through some excavation of the second turn. That turn was always problematic. On the slow days it was fine and on the fast days it was not fine! By adjusting the shape of the turn and adding earth a few places we think we have made it both safer and faster. Parents and campers rejoice! The ride to the top: with the addition of the Birchmobile for hauling campers back up (rather than the tractor) the ride up will be faster. That means more runs in a weekend!

Winter camp is around the corner. During February we’ll host elementary and middle school age campers for weekends and long weekends. Winter camp at Bethany Birches is something to behold. Super great food (afforded by volunteer cooks), 160” annual average snowfall, a large indoor space for getting out of the cold, a backcountry ski program and a quarter mile tube run. I wanted to take a minute to update you on the tube run.

See you here this winter?

At camp, we tend not to do commercials. We aren’t a commercial place and we try hard to remain rustic. We cook meals over the fire, use wood to heat buildings, use cast iron to cook food, light our way at night with gas lanterns and all sorts of other old-time stuff. This lack of technology at camp helps keep distractions at bay (although, let’s be honest, cast iron and gas lanterns are awesome technologies!).

As we learn how to communicate with the outside world, we try to demonstrate camp as best we can so those who haven’t yet been to camp, can gain a sense for how fun it really is. Each winter camp session, campers just can’t seem to get enough tubing!

We used video to demonstrate how much campers LOVE to tube in this 30 second commercial.

See you at winter camp?

Tracks in the Snow

The hill is finally snow covered. Actually, camp is snow buried.  For those of you that have seen me at a snow camp, what I’m about to write might surprise you. My heart sinks when the snow starts falling. There’s no arguing the snow is beautiful. Clothed with adequate warm weather attire I love to go tubing, snow shoeing, skiing, snow painting or falling in the snow to make a snow angel. What I hate about snow is driving in it! I hate the fact that the roads I drive daily become unpredictable and dangerous. The additional travel time is detrimental to a chronically tardy person. I don’t enjoy the increase of blood pressure and white knuckles that are my body’s response to driving in the snow.

The other day I was lamenting all of the above as I watched Tuna drive away in inches of snow towards Killington. It’s so natural for Tuna to drive in the snow. As I pondered the many differences between us small indentations in the snow caught my eye. The indentations led straight to a tree. My gaze then caught another set of tracks. These were much bigger leading from the road to the woods. I was suddenly reminded that I am not the only one adversely affected by the snow. As the snow gets deeper moving around the woods becomes more challenging for some animals. The whereabouts of animals become more easily detected after a fresh snow fall. Despite the increased challenge, God gives these animals adaptations to make snow survival more possible. I was reminded of the adaptation God has given me in an AWD Subaru to get around in the snow. Despite my fear, I can usually get where I need to go in the snow.

I hope that someday I become more comfortable traveling in the snow but after 5 winters of white knuckled driving on the hill I’m not so sure I will.  At camp we often look around us to attempt to learn from nature. Seeing animal tracks in the snow reminds me that despite increased challenge, fear and adversity God gives each creature the resources required to live. (Philippians 4:19) God provides us with whatever we need to make our mission possible.

Come see for yourself, join me on the hill this winter for some animal tracking:) 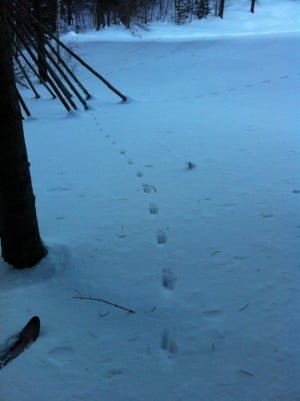 Animal Tracks by the Tipi_Jan 13