Bethany Birches Camp manages to combine the very best of the old and the new. At the end of October, BBC hosted the Camp Association Annual Meeting, held for the first time ever on Zoom. While we could not gather together for the traditional potluck supper, as the Association has for many years, we could meet, talk, and conduct business safely. Conducting the Annual Meeting via Zoom also allowed seven out-of-staters to participate without traveling. At this meeting the Association approved two new members of the Board of Directors. Margaret “Batman” Campbell, Lebanon, New Hampshire and Maxwell “Nye” Halik, Wakefield, Massachusetts, who both have had a long affiliation with the camp. At a subsequent meeting of the Board, Max was approved for a one-year term as Vice President and Margaret was approved for a one-year term as Board Secretary. 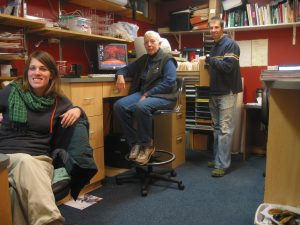 Margaret first visited BBC in 2005 to participate in a Women’s Retreat. A year later she began regular volunteer work in the camp office which continued until late summer 2015 when she moved from Vermont to New Hampshire. During that time Margaret helped with mailings, camper registrations, paying bills and making bank deposits, as well as other duties. One of Margaret’s particular interests has always been the Kids to Camp Fund which provides assistance to campers when a family cannot afford to pay the entire cost of attendance. You can give any time to that fund at www.bethanybirches.org/give.

Max was first introduced to camp by his friend Taylor in 2007. Max was apparently taken in by Camp’s combination of silliness, laughter, truth and “Mission Impossible.” Since he was 14 years old, Max has figured out how to return to Camp every year. First, he came as a camper, eventually worked as a counselor, and in 2015, Max served as Assistant Program Director. Of particular importance to Max was how the Camp gave him a concrete model for living a life following Jesus. Serving as a staff member at BBC gave Max the opportunity to introduce young campers to the way of life he found so rich and fulfilling.

Joining the Board of Directors in late Spring of this year “felt like a full court press,” Margaret said. “We had frequent meetings during spring and early summer trying to help the camp staff develop plans to safely hold camp in the midst of the COVID-19 Pandemic. At the outset it seemed impossible,” she said but in the end, it worked and camp sessions were held safely. “I’m excited 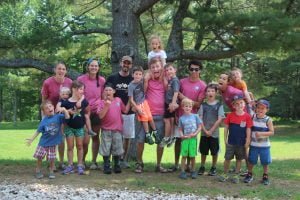 about working on the Board with others who are committed to providing quality, caring, nurturing programs for youngsters that will introduce them to a meaningful way of life.”

Max felt similarly swept along by the process of joining the Board during a time of pandemic preparation. “It was good to step in to assist Chad [Chad Yoder is the Board President] and the other board members, to feel useful especially for a summer where I knew I would not be able to come volunteer personally,” Max said. Asked about his thoughts on now officially being part of the Board and serving as Vice President, Max had this to say: “I’m really looking forward to contributing my hands-on experience with the day-to-day reality of counseling and running programs at BBC.” Max was on staff for many summers. “My hope is that this practical familiarity with the camp will help guide our strategy and to direct time and energy towards where the camp needs it.”

Max is excited to join the board and in his words, “Serving on the board after working at camp was something modeled for me by others serving BBC, such as Dave Ross. I’m so proud of our community, which demonstrates commitment to what we care about. I hope that other campers and counselors, former or current, will see that pattern, and think about how they could continue to help this camp which has given so much to us.”

There are so many within the Bethany Birches community that have long been active in providing financial support, volunteer time, avenues for camp publicity, camper and staff referrals and general encouragement and cheerleading. We need each of you! If you are not part of the association, you are encouraged to consider becoming members. If you’d like to talk about this possibility, please contact Brandon Bergey (Executive Director) or Chad Yoder (President of the Board of Directors).

Each year in March, we have our Annual Association Meeting.  The Association is the formal ownership group of the camp (being a non-profit, there are no financial benefits to ownership).  FYI – anyone can join the association.

It’s a fun evening; sharing a meal, hearing from the staff and board directors and conferring together about important issues.  This year the association had discussion around the camp’s core values.

You can listen to a good portion of the meeting right here.

It would be great to see you at next year’s meeting!

For the first time in a decade someone other than Cheeks will hold the role of BBC Program Director. While Cheeks is learning how to take care of a newborn, Dan will be leading the BBC Summer Program. Both people are excited for the summer ahead of them. Read on to find out more about Dan and why he’s excited to be at BBC this summer:

“The Lord’s hand was clear in guiding me to this place. After spending months looking for jobs at a camp, the Lord brought me on a trip from Pennsylvania to Virginia where I heard about this job in Vermont. I’ve been on site for just a few days now and have already fallen in love with the camp; the rustic atmosphere, my loving and godly co-workers, and of course the gaga pit! I’ve already sat down with Cheeks and done some major planning for this summer, and let me say, it’s going to be AWESOME! I’m so excited to present some amazing new games and activities that I’ve learned at my other camps, while bringing back some classic BBC camp games!”

Dan has a host of experience in camping. He spent the last 6+ summers working at camps and he grew up at camp. He recently graduated from Cairn University with a double major in Bible and Music Education. He’s been at BBC since Wednesday and already he’s seen most of camp, eaten at Ramunto’s and played games with Nanuk. COME JOIN US on the hill this summer to meet him in person and find out his camp name!

Dan Laubach as Interim PD for 2015

This past Saturday night, we had our annual meeting at the First Congregational Church of Woodstock (thanks for that FCCW!).

It was a good turnout as seen in the picture above.

The agenda included reporting, visioning and a pot luck meal.  One thing we wanted to show but didn’t have time for was Robert’s fly through of the new pavi.  You can watch it over here.

During reporting, we covered much of the annual report.  You can read it for yourself right here.

For those of you association members who missed Sandy’s song, here it is:

Want more info on joining the BBC Association? Check it out.

My name is Bailey Bontrager and I grew up in Bridgewater, VT. I majored in Mathematics and Secondary Education at Goshen College in Goshen, IN. I was first involved at Bethany Birches Camp when I was younger as a camper and then I was a camp counselor for three summers during my college years. I love playing and working with children of all ages, and I especially love encouraging them to see the joy in life and to figure out what they are passionate about. Bethany Birches Camp has helped me discover the ways in which I want to work with children and I want to be a member of the Camp Association so that I can continue to support this place that has brought me so much joy and hope.

It’s that time of year! When the Bethany Birches Association gathers here at camp.  In short, we work together, eat lunch and transact business.  This year, however, our business transacting will be cut short by two very important things:

So please, mark your calendar and plan to join us.  Even if you’re not an association member. The day is open for all!

9:00 am – work begins. Total agenda not finalized, but may include: water tramp, clean kitchen, carpentry in shelters, trail maintenance.

Can you make it?  Drop me a line at brandon @ bethanybirches.org

See you on the hill this spring!