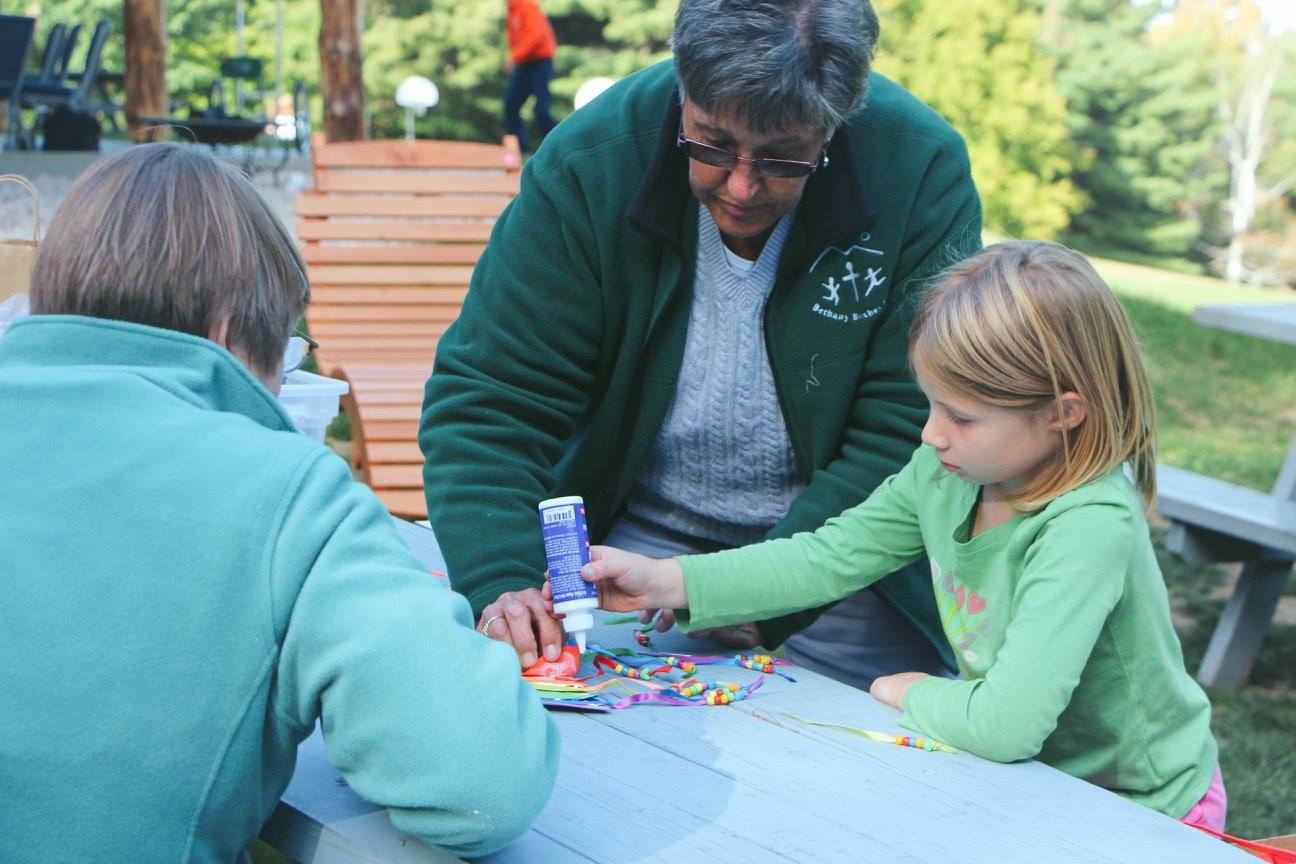 The Bethany Birches Camp experience teaches many things. Some campers learn how to shoot a bow and arrow, some learn how to cook food over a fire while others uncover gifts God has given them. Learning at camp isn’t limited to campers. Bev Goshow (AKA Grandma Cookie Dough Chaos – that’s her camp name) thought she was coming for one week of serving in the kitchen back in 2010. Seven summers later she is retiring as the camp shepherd for BBC’s youngest campers. Thank you Grandma Cookie Dough Chaos for being open to how God would use you. The following paragraphs are Grandma’s reflections on her path to becoming a camp shepherd at BBC.

As a child I loved attending Camp Sankanac in Spring City, Pa.  At that time I was unaware of the seed being planted and nourished. Fast forward to 2010. My husband Dave (aka Woodchip) and I volunteered one week at BBC. I was helping in the old kitchen. When I wasn’t in the kitchen I enjoyed Fireside and soon found myself actively singing with the kids.  I’m not sure what happened to me that week.  I found myself going down the slip n slide laughing the entire way while campers chanted “Grandma! Grandma! Grandma!”

Before leaving camp, Amber (aka Cheeks) identified one of my gifts as loving children and invited me to be the shepherd the following year.  She told me to pray about it.  I told her I wouldn’t!  I was afraid of what God was calling me to do! My husband Dave felt differently.  Dave said right away, “She’ll do it.” He then turned to me and said “You’ll be great at this! It’s right up your alley.”

Preparing for the first year of shepherding brought a lot of anxiety.  I had no formal education to do this job.  I was just a willing helper.  I was fearful the counselors would correct one of my Bible stories!  Nothing like that happened.  I prayed God would be present and this was for HIM, not Bev.  I LOVED my new role!

The highlight of shepherding over the last few years was to share about a loving God and the way of Jesus with 6 to 9 year old campers.  I had the total attention of campers when telling them the Bible stories in flannelgraph!   You usually could hear a pin drop – even with 84 active kids!

One of the memories that stands out was when I shared the story of Jesus feeding the 5000. Quietly the children filed passed me as I gave them bread and fish (Swedish) and told them Jesus loves them.  It was so reverent and peaceful.  I cried like a baby as the last child went through.

As a camp shepherd I always had one goal: to plant seeds for children to know Jesus as their personal savior and to nourish those seeds in whatever way possible.